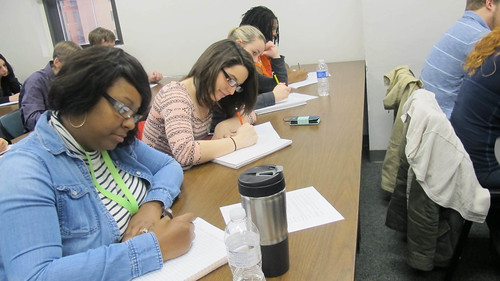 Karen Dwyer, Ph.D., assistant professor of English and a long-time admirer of O'Nan's work, arranged for him to be the featured speaker of the Point Park University Writers' Series this semester.

"O'Nan is a huge writer, a major presence on the literary scene; but he has a reputation for being kind and generous and deeply loves Pittsburgh," remarked Dwyer. "He's high energy as a presenter, which our students really responded to."

During the master class, O'Nan, author of 15 novels including a national bestseller and finalist for the Los Angeles Times Book Prize, engaged students in various writing exercises while encouraging them to "write toward what you do not understand."

"I found Stewart's presentation style to be engaging and very informal in the best possible way. He delivered his material in a fun, fast-paced manner that kept us interested and eager for more tips and advice on writing and composing fiction," explained Hannah Morris, a senior acting major.

"When writing, always ask yourself, 'What is interesting?' Look for the story that hasn't been told or tell it in a better, different way," advised O'Nan.

Later that day, he did a public reading on campus of his latest book, West of Sunset, which is about the last three years of F. Scott Fitzgerald's life.

"I felt his reading was perfect. The passage he read was just enough to entice the reader to enter the beautiful world that O'Nan constructed of Fitzgerald's last years," remarked Autumn Whitehead, a senior English/Creative writing major. "Overall, I found O'Nan to be congenial, helpful, knowledgeable and delightfully humorous."

O'Nan's advice to students on dealing with rejection as a writer was simple yet poignant. "Stick with it," he said. "It's the greatest job in the world."

"His advice on rejection was extremely helpful and inspiring to me. It's important not to give up. Even successful writers such as O'Nan have had to face plenty of rejection in their lives," said Morris.