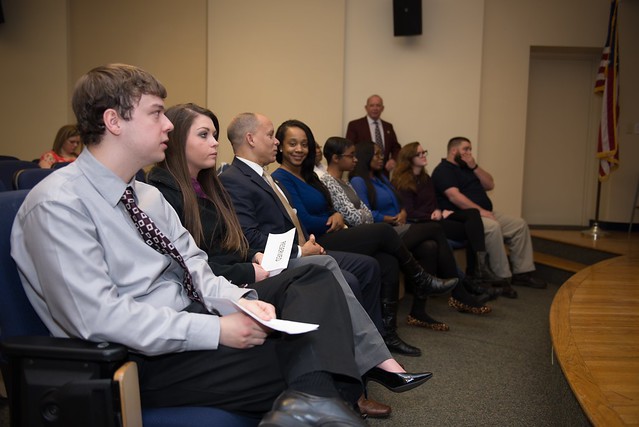 "The students inducted represent not only exemplary academic achievement, but also a strong commitment to the criminal justice profession and service to society," remarked Linzer.

According to Linzer, membership in Alpha Phi Sigma is founded on four ideals - academic excellence, leadership, service and unity - and each member accepts and commits to these ideals.

"To me, being inducted into the honor society represented the past, the present and the future," said Logan, who earned his B.S. in criminal justice in 2015 from Point Park and is currently pursuing an M.A. in global security and intelligence.

"I was following in the footsteps of past students who had walked this same road but I was in the present moment with my fellow classmates looking to the future as we will all soon move on to become future leaders," Logan explained.

As chief of county detectives for the Allegheny County District Attorney's Office, Logan said he uses the education and knowledge he has obtained from Point Park to supervise, teach and direct his employees.

Hansom, a senior criminal justice major who transferred to Point Park in 2014, plans to pursue a career in computer forensics.

"My experience being inducted into this honor society was amazing because I worked so hard to get my grades together," said Hansom. "Point Park has helped me a lot."