Cody Monfredi, Emily Kubincanek and Lindsay Haslett were among the Point Park student volunteers
at the 2017 Creative Nonfiction Writers' Conference.

Students had the unique opportunity to attend the conference at a highly-discounted rate or could volunteer for free admission.

This was the Creative Nonfiction Foundation's fifth conference in Pittsburgh, but the first time it worked with a partner — Point Park University — for its annual event. CNF was founded by American writer and literary innovator Lee Gutkind.

"I've had two creative nonfiction classes at Point Park so far that have opened my mind to this genre of writing. The conference only continued to add onto this interest and made me even more excited for the Advanced Creative Nonfiction Workshop course I'm taking in the fall," said Cody Monfredi, a junior creative writing/English major and psychology minor from Carrick High School in Pittsburgh, Pa.

Monfredi added: "I loved meeting different people who are all interested in creative nonfiction. I give the conference a 10 out of 10 and would attend again!"

"I volunteered for the characterization presentation by Professor Girman. It dealt with how to characterize real people who are present in nonfiction pieces, such as a memoir, so that the reader is shown a character without being told what they are like outright," explained Emily Kubincanek, junior creative writing/English major and screenwriting minor from Brooke High School in Wellsburg, W.Va.

"This conference made me consider my own experiences as a well of writing material that if done right, people will want to read," Kubincanek added.

"We really wanted to get our students involved in this conference. A lot of people think nonfiction is dry and merely informative. But not so. It's about heartbreak and joy and desire and everything else life has to offer," Girman said.

Conte added: "The conference allowed Point Park University to serve as a convener for a national discussion about storytelling. At a time when the written word seems under threat and amid an uncertain political climate, it was great to work with so many people who feel passionately about telling meaningful, impactful stories."

"Professors Conte and Girman have helped me tremendously both personally and professionally over the last year. I'm grateful the two of them pushed me to attend the Creative Nonfiction Conference," said Neil Strebig, a 2017 journalism graduate from Freedom High School in Bethlehem, Pa.

"Listening and talking with fellow writers and editors Esquire and Proximity Magazine not only gave me a bump in confidence, but reassured me in my approach to writing both creatively and as a professional journalist," Strebig added.

Baylee Buleca, a senior multimedia major with a concentration in graphic design from Franklin Regional High School in Murrysville, Pa., said: "I hope to become a graphic designer who creates magazine layouts. Hearing from editors about which articles they like to publish, how they want their magazines to look and so on was beneficial to my career goals."

Girman added: "The conference helped our students to see how the 'creative' in nonfiction is all about the artistry and reflection you put into your writing. You are not boring, so your writing shouldn't be either." 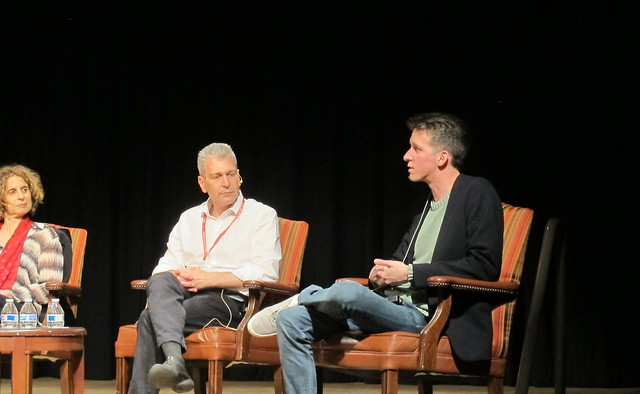