"As with traditional sports, within esports, a great play becomes truly iconic with amazing commentary. Great commentary doesn't just happen; it requires hundreds of hours of experience studying the game itself, knowing the context of the teams and players, being accepting of constructive feedback from other broadcasters and working well with a cross-functional production and events team. As one of our premium esports commentators, Ryan Bailey demonstrates effective communication, critical thinking and strong interpersonal skills, and I believe his liberal arts education gave him a great foundation in all these areas."

"I am lucky enough to have been part of the first wave of esports talent. I am one of the few who has a degree in broadcasting and real experience in a TV studio. That won’t be the case for very long as lots of students see the opportunity that is esports broadcasting."

How did you land a position in the rapidly expanding field of esports?

I began working at 93.7 FM The Fan towards the end of my senior year at Point Park, eventually working my way up to a producer/on-site engineer position. During this time, I started playing Smite, a third-person multiplayer online battle arena (MOBA) game developed by Hi-Rez Studios, competitively in my free time.

I had opportunities to travel to New Orleans, Columbus and Atlanta to compete in local area network (LAN) events. I was asked to come to Atlanta and do guest commentary for Skillshot Media (owned by Hi-Rez Studios), during an event for which my team failed to qualify, similar to how ESPN will use a football player during the playoffs if their team isn’t playing.

I very much enjoyed the broadcast end of the business because it was a perfect marriage of my background and my passion for the game. I immediately accepted a full-time offer as an esports specialist/commentator for Skillshot Media! 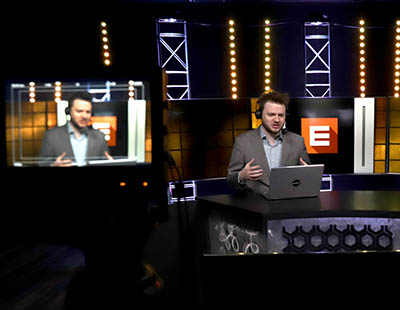 Tell us about the work you do.

We operate a league that is incredibly similar to traditional sports. During the regular season, it’s a long grind doing color commentary for months. My usual day is prepping for the games I’m working that week. I also have to do plenty of my own practice, both in-game so that I can understand it better, and re-watching my commentary to identify areas I need to improve upon.

I also have the opportunity to help the Smite design team create new characters or make balance changes to the game. During bye weeks or the offseason, I work to create content about the pro players or the game. I also get to work for other games, like casting The Halo Classic, or serve as the emcee at local charity events.

How did your classes at Point Park prepare you for your career?

There is no substitute for experience gained on the job, and Point Park’s assistance in getting amazing internships made a huge difference for me. My internships at 93.7 FM The Fan and KDKA-TV shaped my work ethic and understanding of the industry. It was also a great opportunity to gain connections in the field, which directly led me to a job in Pittsburgh broadcasting and then to my current position in esports.

Without a doubt, the best preparation I had at Point Park was from Gina Catanzarite’s On-Camera Performance class. Gina’s honesty and eye for broadcasting mistakes were critical in my development as on-air talent.

Tell us about your involvement in our upcoming Esports event on campus in May.

I’m very excited to attend the Steel City Showdown at Point Park in May! I’m looking forward to talking about esports with the students and offer insight on the main differences between sports and esports broadcasting.

What advice do you have for Point Park students?

You have to work really hard. It’s a cliché, but it’s a cliché for a reason. Working in esports is awesome because you get to play and talk about video games for a living. But because it’s awesome, there are a ton of people competing for limited job openings. You can’t guarantee you’ll always be in the right place at the right time, but the best way to up your odds is to be a hard worker. Esports fans also expect a lot out of the on-camera talent, whether it be a desk host or a commentator. You need to know player and game history, knowledge of the meta and still be technically sound as a broadcaster.

I am lucky enough to have been part of the first wave of esports talent. I am one of the few who has a degree in broadcasting and real experience in a TV studio. That won’t be the case for very long as lots of students see the opportunity that is esports broadcasting. I hope that more Point Park students can make their mark across the industry!