Center for Media Innovation: A Learning Hub for Students to Hone Skills for their Future Friday, September 22, 2017

In its second year of operation, Point Park University's state-of-the-art Center for Media Innovation continues to provide hands-on experience and networking opportunities for students, as well as serve as a hub for local media and the Downtown Pittsburgh community.

Point Park marked the first anniversary of the CMI with a plaque unveiling - honoring the late Richard M. Scaife, founder of The Allegheny Foundation, which donated $2.5 million to build the CMI - followed by two #MediaPioneers panel events Sept. 12.

"The highlight of the last year was to see Point Park students take over this space," said Andrew Conte, director of the CMI.

He added: "We are going to build on the foundation of what we started here and continue to bring in media pioneers - people who are doing something brand new in journalism."

"One thing I learned from the panelists is that the journalism field is changing and it's important to have a rounded set of skills to adapt to that change," said Casey Hoolahan, a senior broadcast reporting major.

She added: "The events at the CMI have connected me to so many people in the journalism world of Pittsburgh and beyond, which has led to interview/networking opportunities."

Sara Mackulin, a senior broadcast reporting major and U-View's station manager, said the student-run television station is evolving because of the CMI.

"At the CMI, my peers and I can hone our skills and express our creativity," Mackulin said. "I can honestly say that it has brought growth to our program. New and current students are working with top-notch equipment and gaining hands-on experience, which will only help them in the future."

Conte's message to Point Park students: "Be here often and get involved." 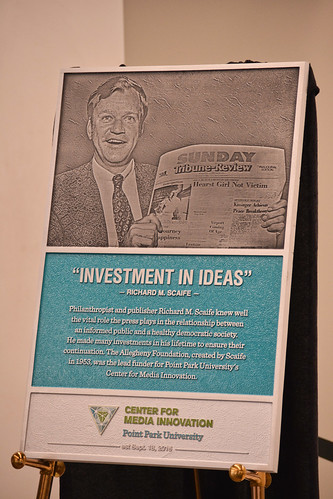